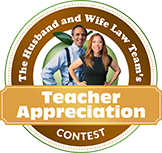 This morning, Melanie Britton’s first hour class was interrupted by attorney Mark Breyer. Breyer was there to present a giant check in the amount of $250.00 and a Teacher Appreciation recognition plaque to Britton, the Music Director at Sandra Day O’Connor High School. After learning that multiple nominations came in from both parents and students, an emotional Britton received a standing ovation from the class. Britton will also receive a feature spot on The Husband and Wife Billboards for a day and her students will receive a celebratory pizza party. Congratulations to this month’s winner MELANIE BRITTON! 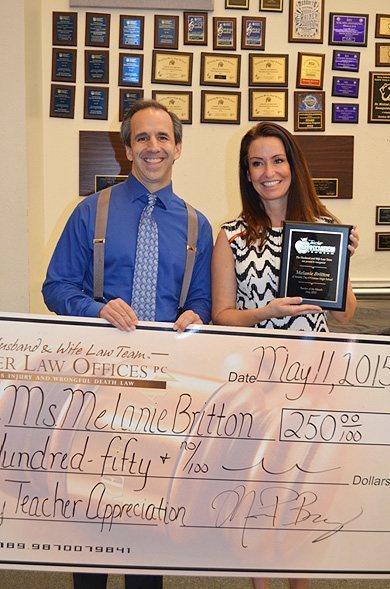 Aside from the multiple nominations received from parents…it was the students’ testimonials that helped give Ms. Britton a win. “She’s a tremendous teacher who teaches us students’ discipline, respect, the value of each day, and the importance of music.”

Britton’s accomplishments include band performances in the Fiesta Bowl Parade, the Holiday Bowl halftime show, as well as the pre-game and halftime performance in the XLIX Super Bowl. “She’s molded all of her students into kids who believe they can succeed in anything they want to do in their lives and is indelibly the most extraordinary person I’ve ever met.”

Have a Favorite Teacher? Let EVERYONE know…Nominate!

Reward your favorite teacher by nominating him or her for The Husband and Wife Law Team’s Teacher Appreciation Award. Each month we recognize an educator that has gone above and beyond in their field. Anyone can nominate a deserving teacher online, by filling out an entry form at https://www.breyerlaw.com/lawyers-for-teachers/.

As the son of an educator, attorney Mark Breyer grew up seeing hard work and dedication often go unrecognized; therefore Mark and wife Alexis Breyer created The Husband and Wife Law Team’s Teacher Appreciation Program. As the parents of eight children the Breyers see many times over how a great teacher can impact the life of a child.

Do you have a favorite teacher? Nominate your teacher today!!!

The Husband and Wife Law Team...

Since 1996, Mark and Alexis Breyer (aka The Husband and Wife Law Team) have helped victims involved in a serious injury accident such as car, motorcycle & trucking accidents, pedestrian, dog bite, construction, or slip & fall incidents. The Husband and Wife Law Team focus their efforts to client service, successful results, and community involvement. “When our past clients refer their friends and family members to us…that is the biggest compliment,” says Alexis Breyer.

The Husband and Wife Law Team have received the prestigious Martindale-Hubble Client Distinction Award and the firm was spotlighted by Attorney at Law Magazine. Mark Breyer is also a certified specialist in personal injury and wrongful death law by the Arizona State Bar.